Last week at work we had a carry-in lunch to celebrate Christmas. A little late, I know, but we were so busy beforehand it just seemed easier to celebrate afterwards. Our theme was soups, which is just about the best thing to have for lunch when it's so cold outside! One of my bosses brought in "Taco Soup" which is basically tortilla soup. I asked for the recipe because tortilla soup is my favorite! This has to be the easiest thing I have ever made in my life and it's delicious! Also, for those who are weight conscious, it's a weightwatchers recipe. Here's what you do:
This soup is heavenly. You can add cheese, tortilla chips, sour cream...pretty much any of your favorite mexican toppings. I added chili cheese fritos and some cilantro. Delicious.
Posted by Girl meets Kitchen at 7:45 PM 1 comment:

Bringing in the New Year

With French Toast and homemade Vanilla Syrup! Yum! I used some french bread that was on the "about to be expired" rack in Kroger. I love that rack, I go in on days I know I'm making spaghetti or soup or something that is great with bread and buy a loaf at half price. It's wonderful. Then I'll use the left over bread for grilled cheese or, my new favorite, french toast. I am not always a huge french toast fan. I don't like soggy bread so it has to be made in a way where you get the delicious cinnamon flavor on crunchy bread. My mixture is pretty basic: milk, eggs, cinnamon. I've taken to adding a teaspoon or so of sugar and vanilla to it as well. I make sure the bread gets lots of cinnamon on it and that it's pretty covered in the mixture but not sopping and completely soaked through. I use thick slices of the french bread for mine as well. Using such thick slices means that it has to be cooked on a medium heat and it needs to be covered so the middle will cook. I start out with a hot pan as well; that seems to ensure a crunchy outside. 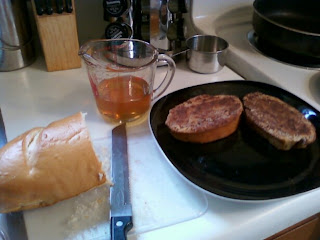 This is the first time I've made syrup. We didn't have any maple syrup; that may sound odd but I don't like pancakes and so I never make them. My husband likes them but not enough to make them himself. And, I don't like maple syrup. Again, an oddity but I just don't like it. (Unless it's maple bacon, which is heaven). Anyway, what I do love is Vanilla syrup. I went to Mexico in high school and the family I was staying with made french toast with vanilla syrup. I've been in love ever since. I really wanted french toast this morning so I decided the syrup couldn't be too difficult to make and went looking for a a recipe. I was right, it was very simple. Sugar, water and lemon juice. The lemon juice sounded odd to me but it really gave the syrup a light citrus touch that was wonderful. Mix the ingredients and boil them until the sugar is completely dissolved, then simmer another five minutes. Remove it from the the heat and stir in some vanilla extracts. Now, it is going to be pretty thin. It will thicken slightly as it cools but I would suggest letting it boil a little longer so that more of the water evaporates out. Just make sure you stir so it doesn't burn. The more water that boils out though, the sweeter the syrup is going to be. I think next time I will make a smaller amount so I can play with the proportions. Regardless of the consistency, it was delicious over the french toast. I just poured a little over mine and it was just the right touch. This will also be really good in coffee; especially if you're a fan of iced coffee. This can go right into the cold coffee without concern over it dissolving. Great way to start 2011, Happy New Year to you all :-)
Posted by Girl meets Kitchen at 1:33 PM No comments:

Cooking is a love I developed when I was about 25 or so. This is me sharing with you :-) 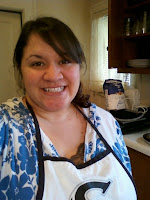